Stories and photos of my Life in the South West 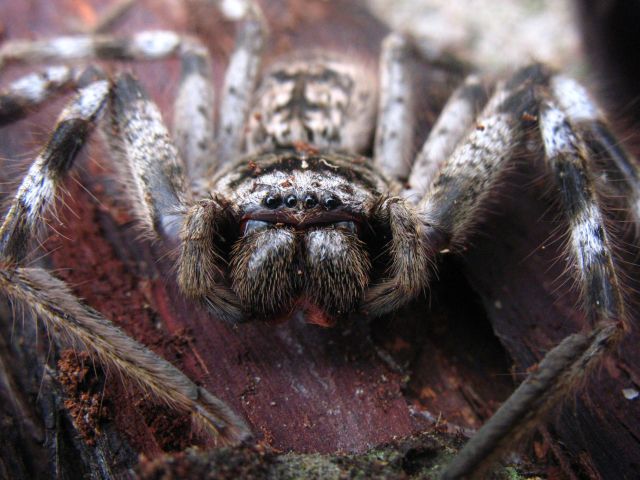 This photo shows the Huntsman, a common spider in our forests and he finds his way into many homes.

My grand-daughter Crystal who is 10 years of age genuinely cannot look at this photo, she screams and runs out of the room. I've thought about putting it up as my screen saver just to keep them away.

I remember an incident with one of these Huntsman Spider's, maybe 40 years back. It's summer and I'm laying in bed asleep with just jocks on and I could hear my name being repeated and repeated very softly. I said "what",  she said "there's a big spider on your back", I said "well knock the f!!! thing off". I don't normally swear, but she did say it was big. She took a swipe at it with a magazine and I swear I counted his legs as he ran up my back. I think it was because the wardrobe was so close to the bed, that I hit it as hard as I did.

Then I looked and realized it was a Huntsman, I'm not guilty of killing one of these. I got him onto the broom, all the time the wife was saying kill him. I took him over and released him on the other side of our street, it was still bush. The next two photo shows they can span the width of your hand. 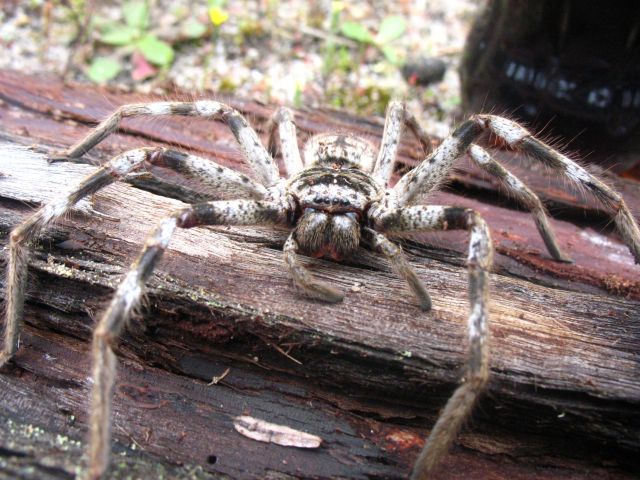 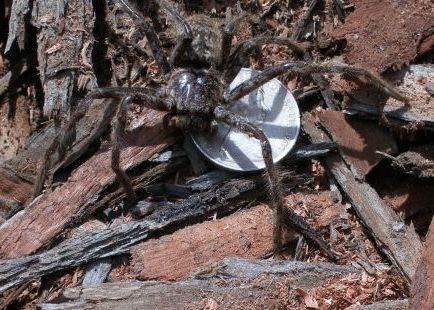 If you were to straighten the big leg in the centre of the twenty cent piece, you can see there's more than enough room for another twenty cent to go along side of it. When you think you can do that on the other side of his body, it tells you that he can span in excess of 4 or maybe 5 twenty cents. It should also tell you how hard I hit that wardrobe.

There was another incident with a Huntsman that I seen and also heard. We were working on the back-waters of a water catchment. Which was once a farm and we were camped in the old house, no power no nothing. We used to get our water from the creek in a bucket. We used to warm the water up for a wash. I can see him now, squatting in a babies bath washing himself.

I looked up and there's a big Huntsman hanging from the roof on the light lead. I put my hand up then I said to him "look here", as he did I knocked the big Huntsman. He looked down and it was on his thigh. He let go with a hideous scream like a woman and leapt about 4 or 5 feet in the air in the sitting position. He was only 14 or 15, I wont mention his name because I finished up related to him, he married my sister. It's the same fella that laughed at me when that fox had my thumb in his mouth. 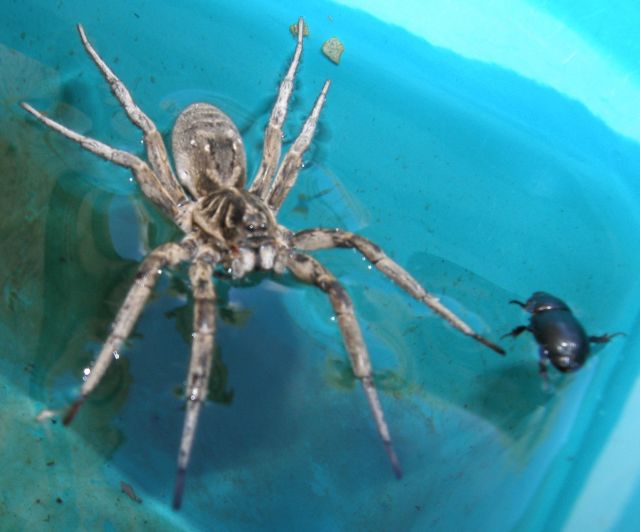 The photo above shows a Wolf-Spider and he's capable of walking on water to get to whatever he's after, in this case a beetle.

The next photo shows the different methods the spider uses to store his tucker. In the Insect or Arachnid world you'd have to say it was equal to our version of a kebab. The different insects that are skewered or wrapped along it's food line. 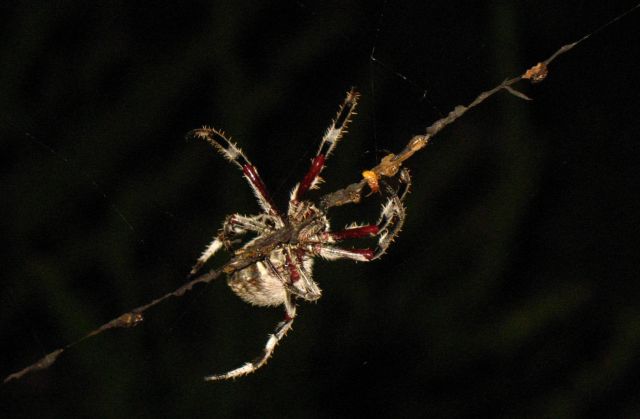 The photo below shows what he looks like from a different angle and you can see why some people have phobias of spiders and people from other countries talk about the creepy-crawlies and things that slither in the forests of Australia. 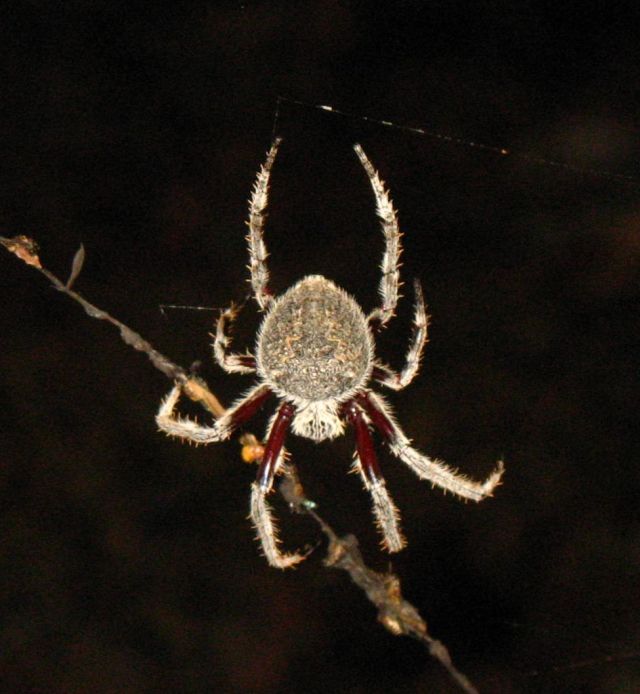 The photo below shows what is known as the leaf spider and it's pretty impressive to think he can lift a leaf the size of the two you can see in his web from the ground with a single strand. Once it's in position, he will roll it up to a tube and it becomes his home and protects him from the many birds that prey on the spider. The next photo is a close-up. 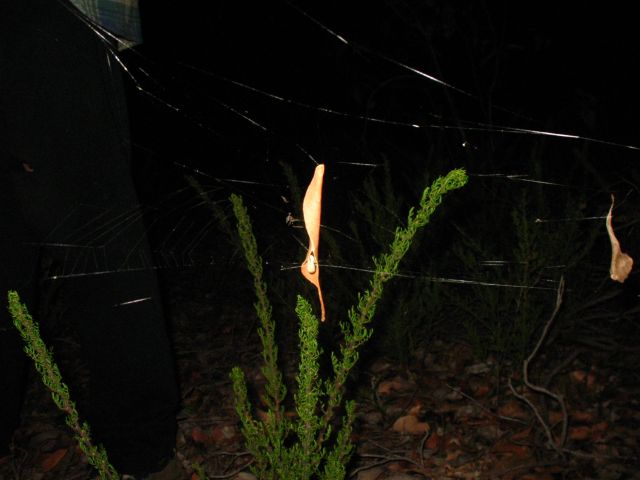 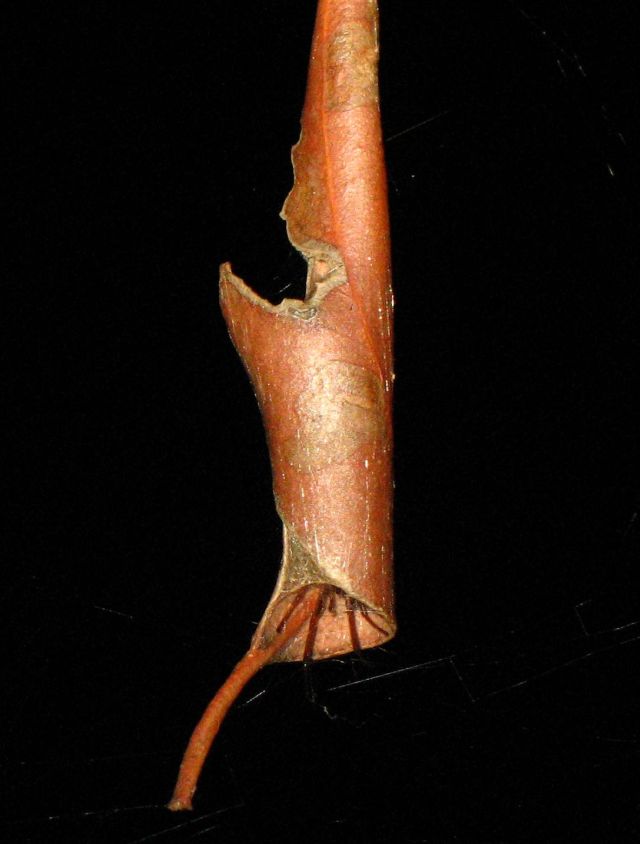 He's the size of your finger-nail yet he can handle a leaf that is 4 inches long and 2 inches wide. 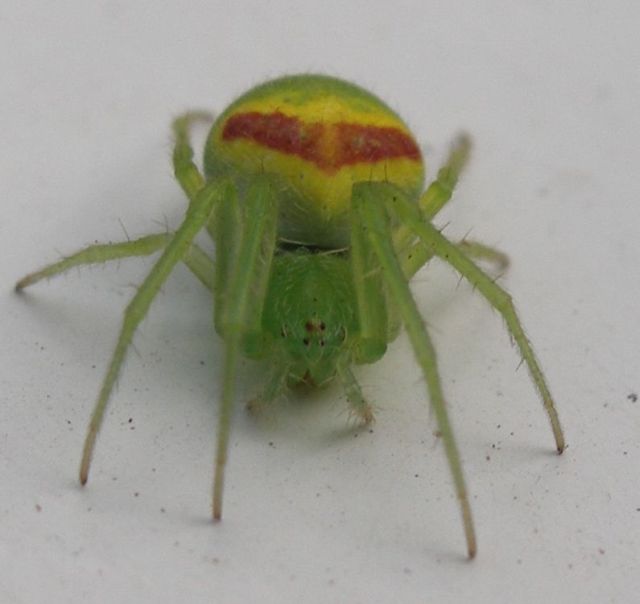 I don't know the name of the spider above also the one below. They say there's many species of spiders yet to be identified, again if any of you spider lovers know their names, I'd appreciate if you could leave a comment in the guestbook. 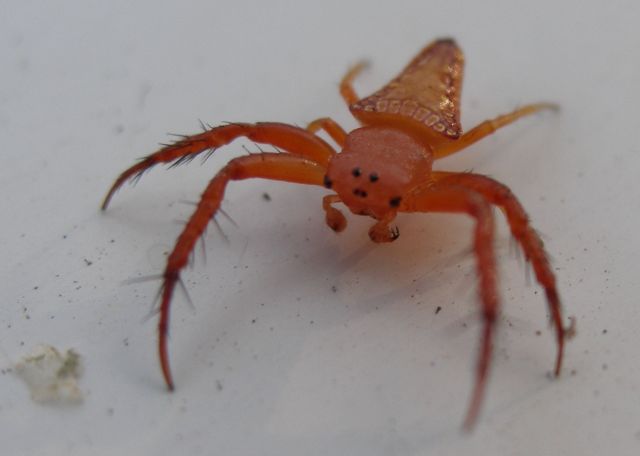 The photo below shows the Christmas Spider and there's hundreds of thousands of them in our bush. 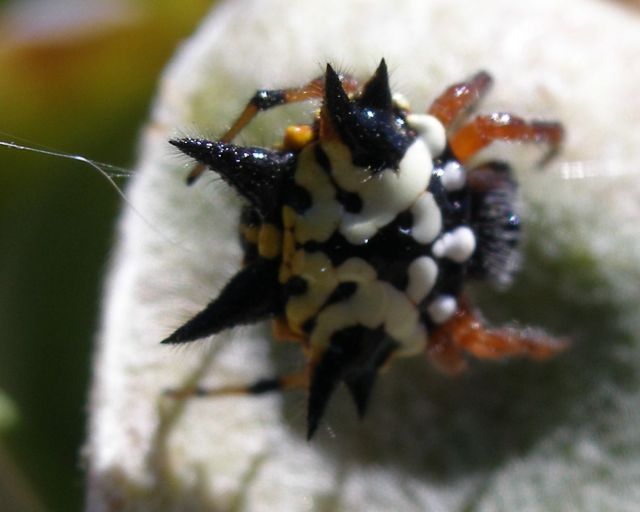 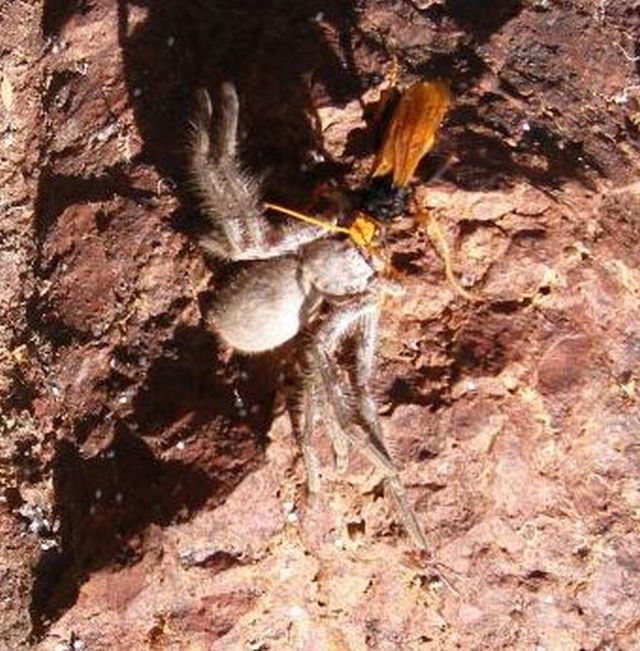 I remember watching a Documentary on spiders and they said the Huntsman was one of the most feared in the insect world and he is, but like the photo shows the hornet prey's on him. I watched this hornet drag the huntsman roughly over 30-40mtrs and I don't know how far he dragged him before I seen it.

The next couple of photo's will show you the conditions he dragged him over. 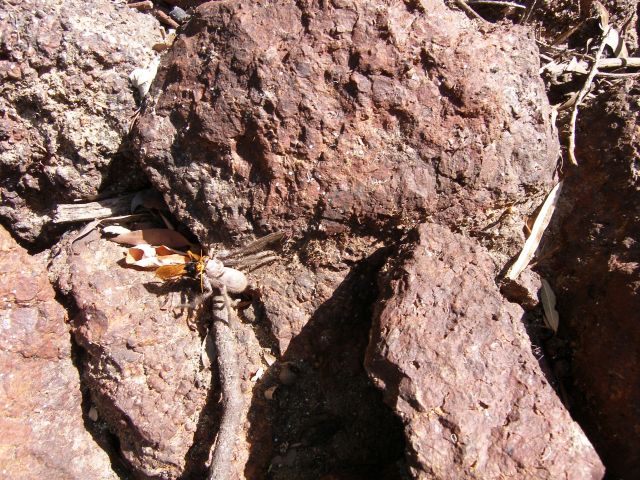 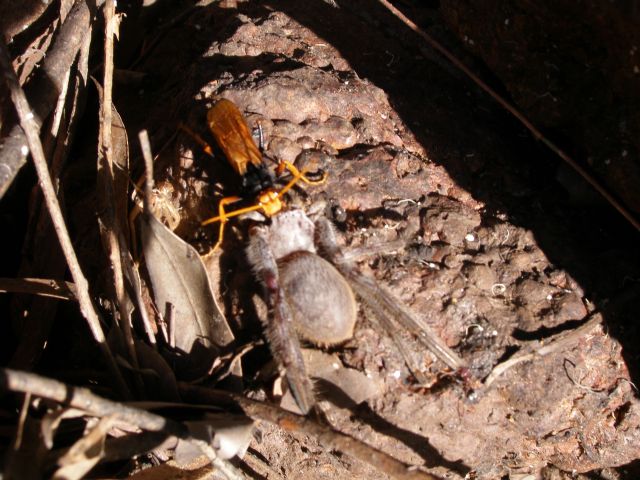 The huntsman is paralyzed from the venom of the hornet. I watched him take the spider to a hole that he'd prepared in the ground, which they then take  underground and deposit I think a single egg. When it hatches it lives off the spider, which I think is still alive but tranquilised. Also he covers the hole back over. I think there was a horror movie produced with humans taking the place of the spider. 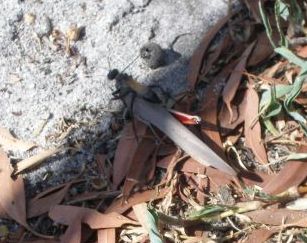 The photo above shows a different breed of hornet with a grasshopper and you can see how he has straddled him so he can walk him to where he'd prepared the hole. The next sequence of photo's shows you what took place. 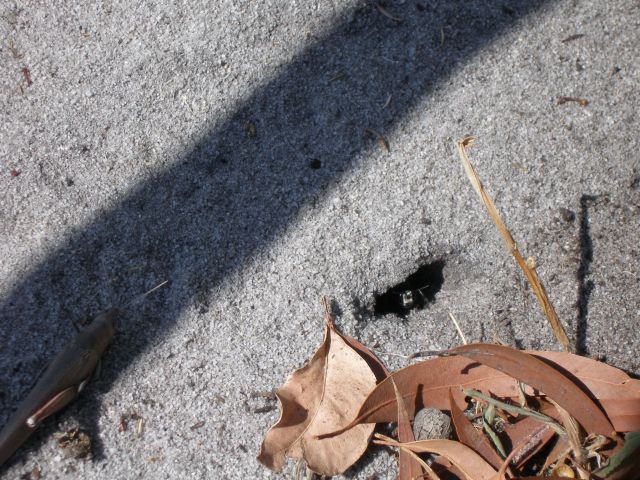 This photo show's that when he got him to where he is, he left him, went down the hole and done some alterations. You can see the hornet returning from out of his hole. He picks up the grasshopper and takes it a little bit closer as the next photos show. 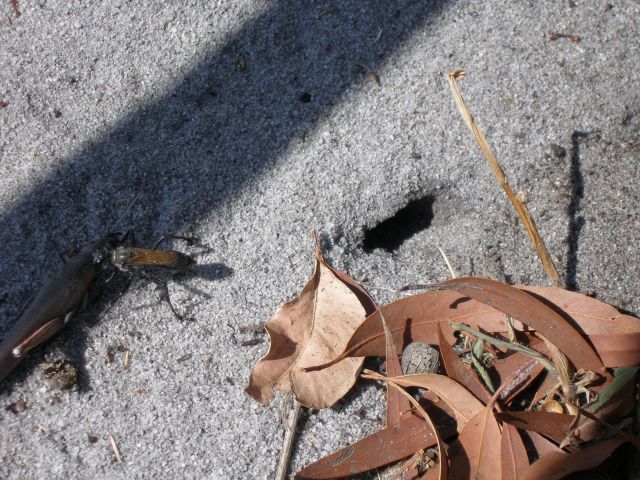 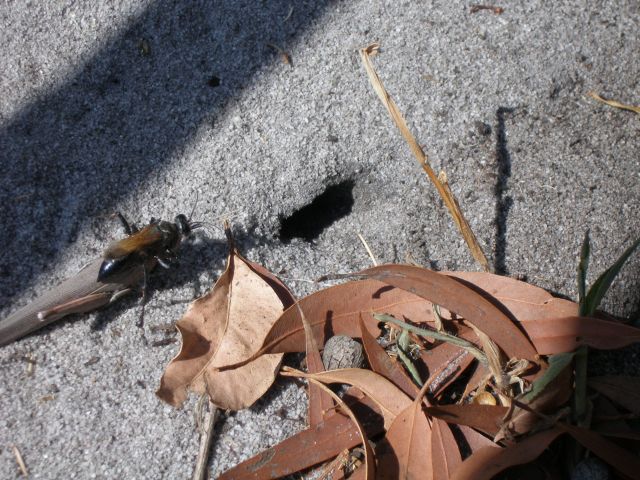 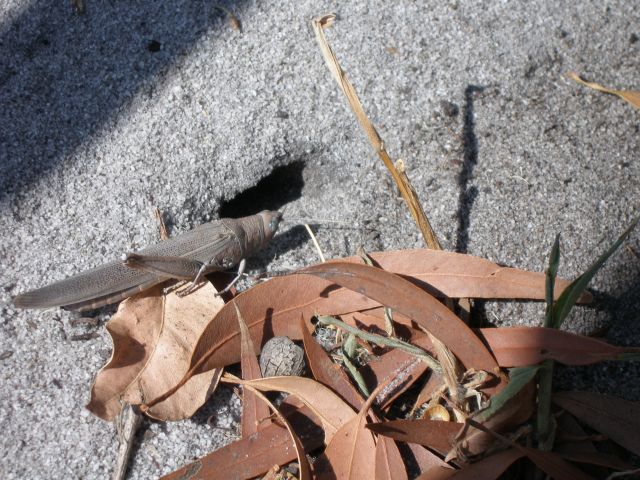 Then it's back down the hole for some more alterations. Now you can see as he disappears. 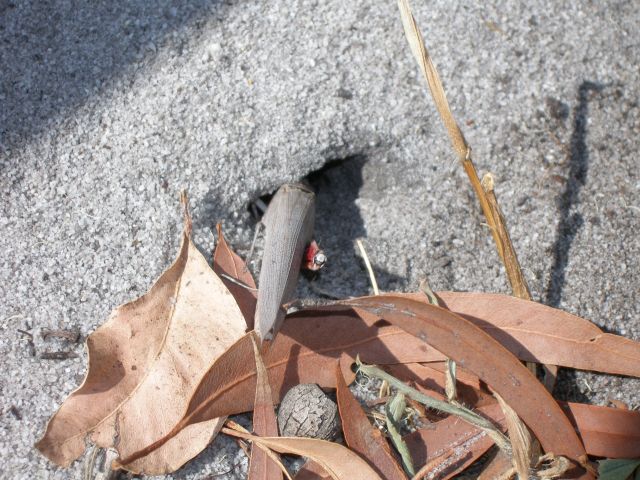 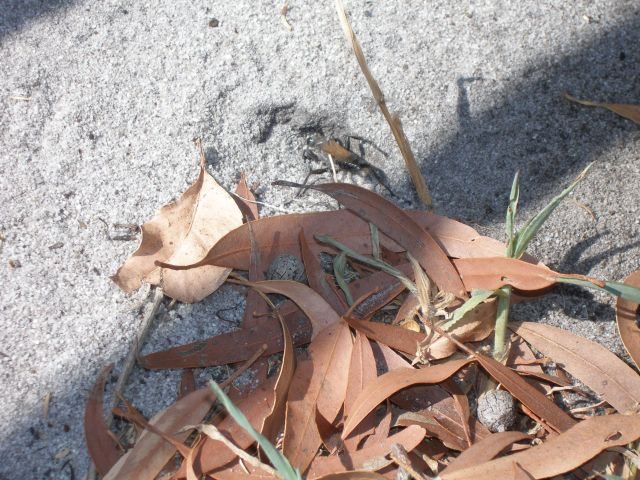 After he's laid the egg on the grasshopper, he set's about filling the hole back in to camouflage it and he does a good job as the next photo's show. Keep an eye on the thin blade of grass on the right of the hornet. 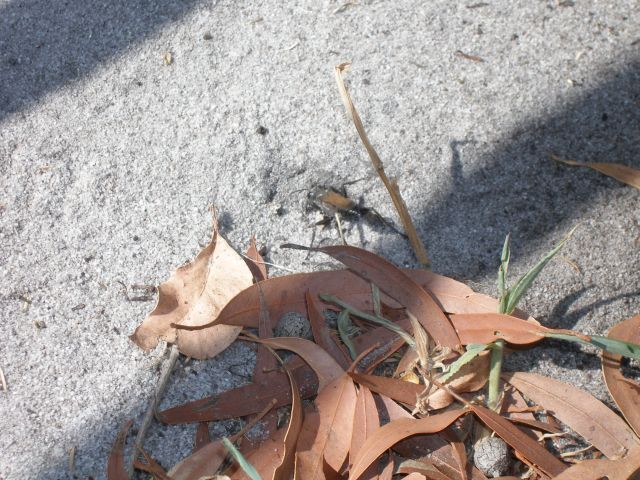 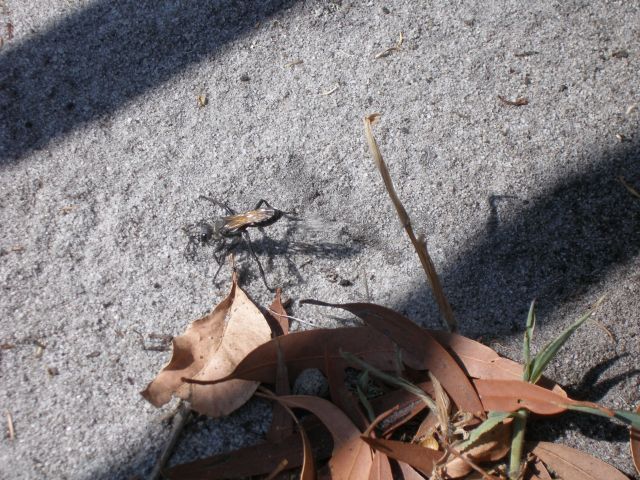 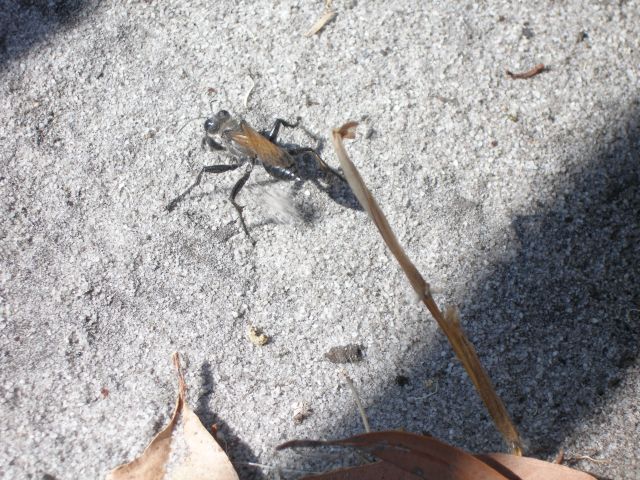 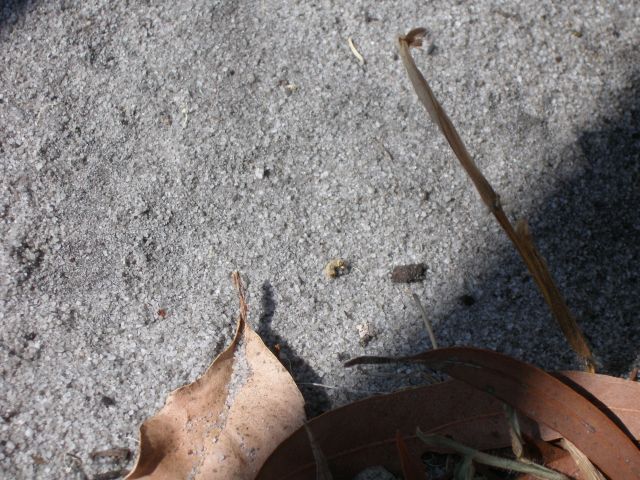 As the photo shows you he's flicking the sand back between his legs. It took him 14 minutes to complete what you have looked at. Then he done something for whatever reason I don't know, he went off to the side about 50-60 centimetres and dug maybe 3 or 4 small false holes. Was it to trick the ants, maybe he left scent there. It also might be to trick other hornets, maybe they will dig the original hole out and lay their egg on the spider or grasshopper, (you would have to ask David Attenborough). 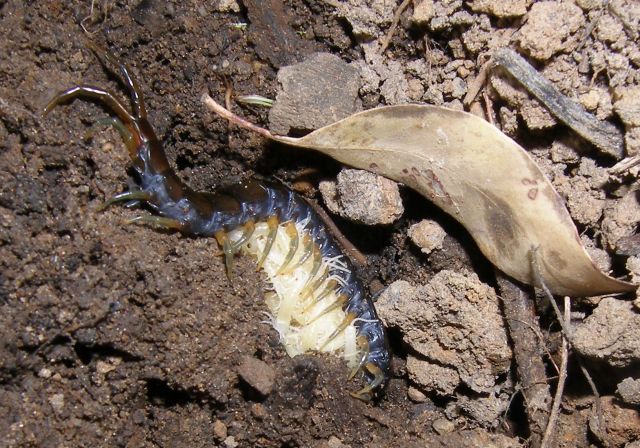 The photo above shows a centipede protecting it's young. I was looking for worms to go fishing for red-fin. I moved a small log and I could see the centipede with it's young, so I covered it back up and left it. About a week later I was looking for some more worms in the same place, so I lifted the log to see if she was still there and she was. So I went back to my car and got my camera. It's hard to estimate how many babies there are. When you think there's maybe as many as you can see on the other side of her body. I don't think too many of them survive, they're high on the food chain of birds, lizards and no doubt spiders. 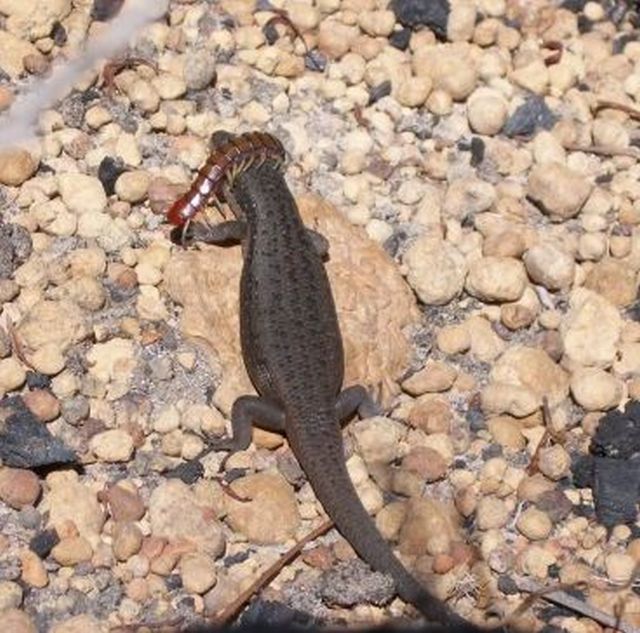 The wife had a bad experience with a centipede one time. We'd gone up north camping for a couple of weeks and the station owner let us camp in the shearers quarters, that hadn't been used for a long time. So the first couple of days was spent cleaning up. The lighting system was run from a generator, which was turned off at 10pm every night. Then we'd light up our tilly lights.

This particular night, the three men were in town at the pub. When we got back out to the shearers quarters the generator had been turned off and the women were getting around with the torches. They told us they were going down for their nightly sauna, which was an artesian bore. So the three men passed out on their beds (only dirty people wash).

When the girls come back from their nightly wash. They decided they'd have a cup of tea, so they're getting around the shearing shed with the torch. The wife had thongs on, our second oldest Jamie was with her. She felt something latch onto her big toe, she screamed the thong went up in the air also the mates wife Ros and Jamie they landed on the table. When the wife put the torch on her big toe the centipede was still locked on and no doubt pumping venom. I can't remember who was shaking me, saying your wife's been bitten by a centipede. She was in for a bad time. She was laying next to me in the bed and her body started twitching and she was burning up.

The sister in-law decided to take her to the local clinic in town which was about a 20-30 minute drive. It was getting late maybe around midnight. The town was too small to warrant a doctor. There was a nurse living at the clinic but there was nothing she could do. She told the wife she would prefer it if she could stay in town and not go back out to the shearers quarters. So she stayed with friends of ours Arthur and Jan Bassett. They were quite concerned and they both kept a check on her during the night. Arthur told us the next day, there's a smaller version of centipede that is more potent. A bad experience. I had to get my own breakfast the next morning. But I battled through it.(joke)

I remember another night the three men returned from the pub. The women had cooked up a spaghetti bolanaise. So the three of us are sitting there getting into the food, all of a sudden the brother in-law Peter jumps up from the table and runs with one hand over his mouth, he ran for the sink first. Then he must have thought he'd make it outside, which he did. He's buckled over spewing. The old bushmen call this the Karrakatta cackle. (Karrakatta is a cemetry in the city.) I grabbed the torch and ran out to where Pete was buckled over and still yodeling. I shone the torch on the ground, then up to his mouth then back to the ground. I said "Pete he hasn't come out yet". He'd chewed up a stink bug or tomato bug that was in his bowl of spag bol. For the people that don't know the tomato bug he is putrid. Pete said he could still taste him the next day.

Coming in to land with a dragon-fly.

This video shows another nickname they've given him The Gold-digger, it also shows he rears his young under-ground like a rabbit. If you turn the sound up and listen you will hear him communicating with his young, I say him but it could be a her.

The Photo above shows a male in full colour.

This close-up shows the pattern on the wings.

This photo show a male and female.

This is a short video of the birds feeding.

Male Blue-wren and his harem